Hunterstown Rovers/Mattock Rangers claimed the U16 A Championship on Sunday with a win over the Cooley/Cuchulainn Gaels in the John Mitchells.

In a close and tight encounter in the first half Hunterstown/Mattock led 1-05 to 0-06 with the goal coming from man of the match James Rogers. 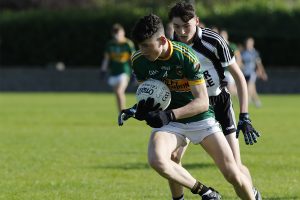 Rogers again found the net in the middle of the 2nd half to cap off a fantastic win for the combination side. A late goal from the Cooley peninsula failed to sparkle any signs of a comeback and in the end the Hunterstown/Mattock men ran out deserving winners on a score line of 2-12 to 1-09 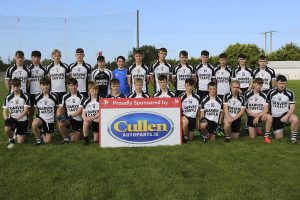 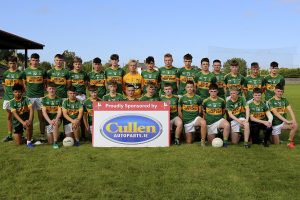 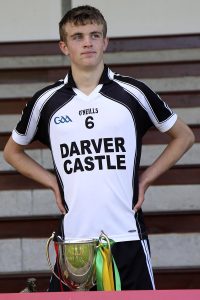 Newtown Blues and Roche Emmets met in the U16 B Championship final at a sun drenched Lannleire pitch on Sunday morning. Both sets of ‘lucky’ supporters who managed to get the elusive ticket for the game were anticipating a close encounter and the players on show didn’t disappoint.

The match began with both defences on top as the teams became accustomed to each other’s positional changes across the pitch. Scores were at a premium and when Adam McDonagh popped behind the Roche defence to notch a 3 pointer, it looked like being a very important score. This gave the men from Drogheda a big boost and only a crucial save from the Roche netminder, Oisin Nash on the stroke of half time thwarted the Blues from adding to their lead.
At half time, Roche were down 1:03 to 0:04.
Whereas the Blues were on top in the second quarter, Roche found their groove at the beginning of the second period. A couple of DD Reilly points levelled the match and when a barnstorming run by John Hodgers ended with a rocket to the top corner of the net, Roche were ahead. The Blues were shellshocked and when Andy McKay picked out Roche dangerman Eoin Maguire with a peach of a pass, the net bulged again to rapturous applause from the Roche supporters.
A third goal duly followed from Maguire to all but seal the deal and when the final whistle blew, players and supporters rejoiced at Roche’s first U16 title since 1989.
The winners were served with brilliant performances from Danny Treacy at full back and Matthew McArdle at midfield with DD Reilly scooping the Man of the Match award with an awesome display throughout.
Both sets of fans will be treated to another titanic battle as both teams are due to meet to joust for the League title in the coming weeks.
Newtown Blues: Rory Mulroy, Joe Harte, Timas Kokotkinas, Luke Doyle, Mario Sinkevicius, Stephen Kerr Rafferty 0-3, Finn Murphy, Cian Cleary, Paul Galvin, Zach Levins, Coinneach Farrell 0-2, Iollan Farrell, Max Gardner, Darius Harab, Danny NugentJames Winters, Ryan Nugent, Finn Nugent, Liam Brannigan, Conor McCriosta, Adam McDonagh 1-01 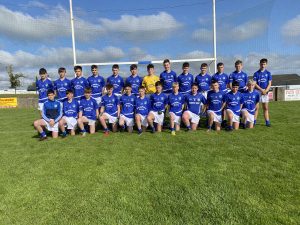 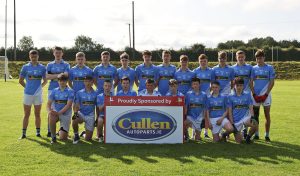 Dont forget to save the date for Louth GAAs Monster Drive-In Bingo.