Louth Underage Competitions to a take 2 in 1 format

By Mark Byrne
372
0
Share:
Louth Minor Board have agreed to change the format of the u14, u16 and u18 competitions.
Our underage Competitions are as follows. Two Competitions in one.

Make sure to tune in to Louth GAAs Official Facebook page next Monday, 6th July at 8pm where the draw will be live. 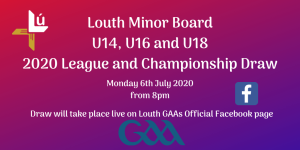 Today is #YourCouncilDay. It has been a genuine privilege to work alongside our colleagues in @louthcoco on the #CommunityCall initiative over the past few months. #InThisTogether #HoldFirm #ThankYou

Our hugely popular Kellogg's GAA Cúl Camps gear is now available to buy online! This gives those who can’t attend Cúl Camps the chance to get the gear. Visit http://www.gaa.ie/kelloggsculcamps/buy-gear #KelloggsGAACulCamps