Hunterstown/Mattock started this game strong with a goal in the opening 5 minutes with Sean Flynn reacting quickest to a great save from Joe McArdle.

St.Kevins/St.Michaels responded with 2 quickfire points from Andrew Wogan and Sean Reynolds before a free from Liam Flynn extended the gap back to 2. St.Kevins/St.Michaels hit the post before Huntertsown/Mattock made a great break up the other end of the field with James Rogers finding the back of the net to open up a 5 point lead.

Hunterstown/Mattock however gathered themselves thanks to a great performance up front by Liam Flynn who added 3 points in the final 5 minutes, Ciaran McCartney also added 2 points and with St.Kevins/St.Michaels only managing 2 in this period, it was Hunterstown/Mattock who held a 3 point lead at half time. 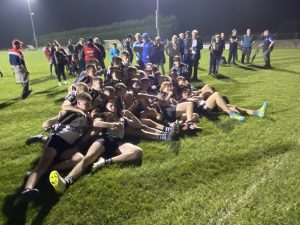 Liam Flynn was having a brilliant game and in the opening 2 minutes he scored a brilliant goal and followed up with a point to open up a 7 point lead for Hunterstown/Mattock.

St.Kevins/St.Michaels started to try and go for goals a bit too early and an early shot went wide of the post.

Hunterstown/Mattock however were dominant the whole way through the 2nd half adding a further 5 point’s and St.Kevins/St.Michaels could only add a late consolation point through Andrew Wogan with Hunterstown/Mattock running out convincing winners on a scoreline of 3-13 v 0-11. 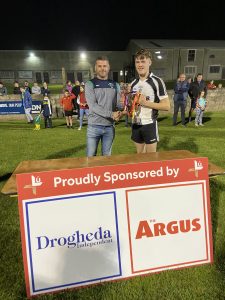 In the Division 2 encounter St.Josephs proved too strong for Ardee St.Marys in Hunterstown.

St.Josephs led 1-07 to 0-02 at half time with the very impressive Evin McEnteggert and full forward Rory McLoughlin accounting for 5 points between them.

Ardee St.Marys did fight back in the second half but the gap was too much too bridge. For Ardee St.Marys, their number 12 Tadhg McDonnell had a superb game accounting for 1-03 of his sides total. 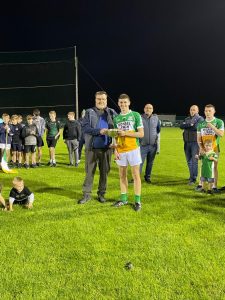 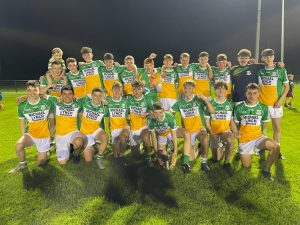