Louth finish league campaign on high with victory against Down

By Dan Bannon at Dowdallshill

Louth showed the greater urgency against an experimental Down side to take the win in this Allianz Football League Division 4 clash at Dowdallshill.

In truth, this resembled a challenge match at times, with both teams’ fate decided last week.

Already relegated to Division 4, Louth were desperate to avoid going through the entire league campaign without a win for the second time in three seasons.

The foundation for Louth’s victory lay in their defence. After being on the receiving end of a rout last weekend against Cork, the Wee county clearly worked on it during the week and were determined not to concede all afternoon.

Louth also countered with three well-taken goals at the right times from Ciarán Keenan and Sam Mulroy in the first half while Conall McKeever got the clincher as the contest entered the final quarter.

Remarkably, only five of Louth’s starting team played in the corresponding victory in Newry last season, while Down only started with three. One of those players, Ryan Johnston, landed the first score of the game. The wing-forward would finish with four in total.

Louth’s top-scorer this year, Mulroy continued the rich vein of form that saw him score 0-11 in Cork, to fire over the first of Louth’s two scores from frees.

The big full-forward then turned provider in the next passage of play. With the Down defence retreating and backing off, Mulroy drove into space and Keenan timed his run right off Mulroy’s shoulder to perfection to cap his debut start with a goal.

Down then responded after the water break with three quick points in a row, Barry O’Hagan, Dylan Ward and Johnston with his second of the half.

By far Louth’s most encouraging performance of the season, they deservedly added to their tally through team captain Bevan Duffy. And things only got better when Mulroy himself then found the net thanks to another mazy solo run.

Just when it looked like he had run out of road, the man in form paused and composed himself to finish powerfully to the net.

In Down’s engine room, Dylan Ward was enjoying a fine debut, getting on a lot of possession and adding a scoring flourishes to match his industry. His disputed point to end the half made it 2-07 to 0-09 at the break in Louth’s favour.

The hosts got the start that Down required upon the resumption, with Liam Jackson excelling on the wing with a point as Louth rattled off three in a row. County champion team-mates from Naomh Mairtin, John Clutterbuck and Mulroy combined in that bright period for the hosts.

Paul Devlin kept Down in touch with three points in feeble response, but Louth were now really enjoying themselves and once McKeever pounced to intercept and finish a John O’Hare kick-out the contest was all but over before the second half water break. 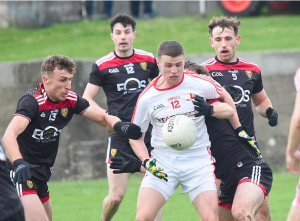 A timely morale boost for Wayne Kierans’ side before they take on Longford next weekend in Mullingar in the Leinster Championship, while in Ulster, Down will have to stew for a week longer to get the loss out of their system, as they take on Fermanagh.