Alfie Monk, who died on Monday, was one of the county’s most decorated footballers. He’ll be best remembered as a member of Louth’s All-Ireland panel of 1957, but even before collecting the biggest honour Gaelic football has to offer, the Drogheda native was an All-Ireland winner, playing for his adopted Meath in the Royal County’s junior success of 1952.

In addition, he won his first Leinster senior medal with Louth in 1953, and also that year played a leading role in Naomh Mhuire winning their one and only Louth senior championship, the Drogheda side scoring an emphatic win over neighbours, Oliver Plunketts, in the final.

Other honours to come his way: three Meath minor championship wins with Julianstown, 1947, ’48 and ’49, the first when he was just 14; Meath intermediate championship with St Patrick’s, Stamullen, and two Old Gaels Cup medals with Naomh Mhuire.

Alfie’s association with Meath came through the visits he made to his Julianstown based grandparents during summer holidays. He began playing with the local club at underage level, and then graduated to the nearby St Patrick’s team, winning an intermediate championship medal with them in 1951 while still a teenager.

His link with Naomh Mhuire came in 1953, the year after the green-and-golds had won the Louth junior championship. He was an instant hit, playing mostly at full-forward and getting among the goalscorers in the 4-10 to 0-8 win over Plunketts. By then he had attracted the attention of the county selectors.

Louth’s 1953 Leinster championship campaign that year began with a 2-11 to 0-5 win over Westmeath at Navan, with Monk scoring 1-2. He was again on the mark for the quarter-final defeat of Wicklow. However, he didn’t make the cut for the semi-final with Meath, the No 13 jersey instead going to St Mary’s Paddy Beahan. Another Ardee clubman, John Callan, was the choice at left-corner forward for the Leinster final win over Wexford, while the All-Ireland semi-final saw yet another Mary’s player, Kevin Beahan, get his chance.

Alfie was well-established by the time the 1957 championship campaign came around, playing mostly in the half-forward line but also making a number of appearances in the half-backs. He was at No 12 for the first round defeat of Carlow, and again for the wins over Wexford and Kildare. His place on the left wing for the final with Dublin was a given, but after just 13 minutes he took a knock to the head and had to come off. Frank Lynch was his replacement.
An x-ray revealed a slight fracture, but while the Mhuires man was feeling well enough to play by the time the All-Ireland semi-final with Tyrone came around, the medical advice was against him lining out. He described missing this match and the final against Cork among the biggest disappointments of his career.

He played on with the county for a few more years, having his final out in the red jersey in the 1961 championship first round defeat to Kildare.

A stylist on the football field and a gentleman off it, Alfie Monk was a couple of months short of 87th birthday. It will disappoint Gaels throughout the county that they’re not able to pay a final tribute to this fine GAA man, because of the restrictions associated with Covid-19. 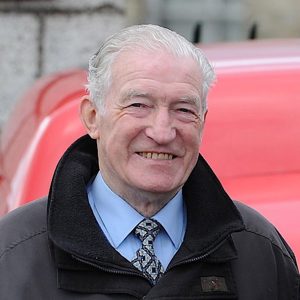