A survey of approximately 1,600 GAA clubs by the Association’s Community and Health Department has highlighted the huge role that clubs are playing in supporting their members and communities during the COVID-19 health crisis.

The survey found that 86% of those clubs have been directly involved in the COVID-19 community response.

That equated to approximately 19,164 GAA volunteers directly supporting 34,571 people in a variety of ways.

“Humbling, really, is the word that comes to mind. When you look at the numbers involved you realise the contribution the GAA is making at this time of crisis in the country.

“If our front-line services or other charities were required to provide support to an additional 35,000 people in our communities, it would put them under enormous drain.

“It allows them to focus on the high-need areas where there’s maybe a higher threshold of expertise or qualifications required.

“Our volunteers are essentially doing their part to prop up and take the strain off the front-line services and allow them to deal with the higher-level requirements this emergency is bringing on our society and local communities.”

The GAA has always prided itself on being a community organisation as much as a sporting one, and the current health crisis has underlined the extent to which it is.

Sport has stopped, but GAA clubs have still been hugely active within their communities in a variety of different ways.

Local knowledge has proven to be a crucial asset in a time of emergency. While statutory services on both sides of the border were still working to get official structures fully up and running, GAA clubs were already being very proactive responding to the particular needs of their own communities.

“The ability of the GAA to mobilise at a community level was immediate, almost,” says Regan.

“And as soon as the emergency hit, we knew that because we have a direct communication line with the 300 clubs that are involved in the Healthy Club Project.

“Almost all of those within the first week of the scale of this emergency becoming apparent were involved in some form of COVID-19 response on behalf of their community. It wasn’t exclusive to the Healthy Clubs, but we were seeing that immediately with them just because we have real-time visibility with the Healthy Clubs Facebook page.

“The numbers involved obviously quickly came to exceed those 300 clubs involved in the Healthy Clubs Project, but they had training in health promotion and partnership development that allowed them to immediately activate their project teams in supporting their communities and pulling together a team of volunteers to deliver groceries, et cetera.

“Beyond the Healthy Club Project, the GAA’s strength in general is our ability to be able to mobilise an army of volunteers for whatever need.

“And, then, also the structures that are required to coordinate and maintain that over a prolonged period of time as we’re seeing now.

“The statutory services in both jurisdictions probably took three weeks to get official structures up and running, so at that stage the GAA was already at the front-line in every single county doing what a lot of them do on a weekly basis.

“It’s hidden a lot of the time because the games, quite rightly, take the centre-stage and that’s what the media attention focuses on and that’s what the community sees to see, the manifestation of the GAA through the very highly physical wearing of the jersey and the playing of our games.

“But this type of work does happen in a much more hidden way throughout a calendar year. The removal of the games has allowed the spotlight of the games to be shown on that element of the Association and I’m anticipating that it will result in a lasting increased appreciation of the community side of the GAA.” 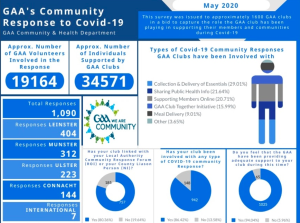