Louth come good in the second half to beat Sligo

Louth turned on the style in the second half against Sligo in the all-or-nothing showdown in the final round of the competitive Division 4 north at a sun kissed Haggardstown.

Mickey Harte’s half-time words turned a three point half time deficit into a ten point victory for his side and importantly a place in the promotion play-off against Carlow in a fortnight’s time.

A brace of goals from talisman Sam Mulroy and another from Ciarán Keenan which Mulroy set up laid the foundations for what looked like an unlikely 13 point turnaround at the interval.

Sligo against the wind settled much quicker with captain Keelan Cawley and Nathan Rooney finding the range to give the visitors an early two-point lead. Louth were snatching at their shots and they had six wides in the opening quarter alone.

With midfielder Paul Kilcoyne dropping deep for the Yeats county, Bevan Duffy, Louth’s former captain, was forced to shoot from long range and his determined effort went over.

Despite Louth opening their account Sligo were well in control and their confidence ever growing.

This was typified by a sublime free kick from Niall Murphy. The former Irish compromise rules player spun the ball over with the outside of his boot.

Things got better for Tony McEntee’s economical side, when prominent dual player Mikey Gordon beat his marker on the outside and drove the ball past Craig Lynch in the Louth net in the 13th minute.

Sean Carrabine’s influence on proceedings has to be noted, with fifteen on his back, playing on the forty he orchestrated the wave after wave of Sligo attack. The impressive Castleconnor man helped himself to three points in the first half.

There was a messy end of the opening period with three black cards handed out by referee Sean Laverty.

Louth held a brief numerical advantage when Sligo full back Eddie McGuinness pulled down Ciarán Keenan but Bevan Duffy and Anthony Williams were both sin binned in the next two plays to hand the advantage straight back to Sligo.

Despite the set backs, Ciarán Byrne kept Mickey Harte’s side in contention with two excellent points but Carrabine deservedly left three between the sides at half time at 1-09 to 0-09. 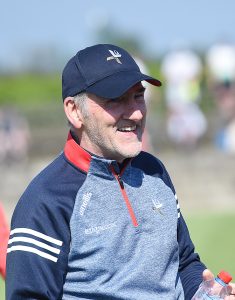 From the restart, Mulroy went in for the throw in with midfielder Byrne and directly from that, the in-form duo worked a match-turning goal. Mulroy drove at the Sligo defence and, with the help of a deflection, his effort turned Louth’s fortunes dramatically.

That dollop of luck ignited Louth into an electric third quarter charge where they outscored Sligo 2-05 to 0-2 before the second-half water break. If Mulroy’s first was fortunate, his second wasn’t.

Quickest to react to a hop ball which his full forward Conor Grimes put in his path, Muleoy buried low to the net.

The new Louth captain then turned provider for Keenan to dispatch to the net and from that stage on, Louth looked certain winners. Niall Murphy did rally for Sligo with two frees but he also picked up another of the games black cards.

The game petered out in the hot sun with Declan Byrne impressing off the bench, with three free’s to enhance his chances of starting in the promotion play-off the next day out .

Harte off the mark as Louth leave ...