Reigning senior football champions Newtown Blues will play Leinster’s Intermediate champions Mattock Rangers in round one of the 2020 Senior Football Championship, after the duo were paired in a group with Ardee St Marys at the draw(Thursday, February 13) at the Louth GAA Centre of Excellence in Darver.

The Blues, who are 23 times winners of the senior competition, and Mattock will face off in the opening game of Group One, with the Marys making up the composition of the three team group, where there is very little room for manoeuvre and one big hitter will exit at the group stage.

Elsewhere in the senior grade, Naomh Mairtin – who the Blues have seen off in the last finals – have been paired with the Mochtas and the Dreadnots in Group 2. The Monasterboice men hot 4-13 in a big quarter-final win against the Mochtas last year.

St Patrick’s and Geraldines will face off in a north Louth derby of sorts. St Patrick’s were the first team out of the draw in Darver followed swiftly in Group 1 by the Gers and the O’Raghallaighs.

In Group 3, O’Connells of Castlebellingam have been joined by St Joseph’s and Dundalk Gaels. All three of those teams took part in the relegation playoff series of games in 2019.

Speaking at the draw, Newtown Blues Colm Judge said, “These are three teams with history of winning championships. It’s a tough draw. We’re just looking to get out of the group. We’re not really talking any nonsense. We’re not really thinking about four-in-a-row.”

Between the three teams – the Blues, Mattock and the Marys – they have 37 senior football championships.

In the intermediate grade, Sean O’Mahony’s, who won the Senior title as recently as 2016, will take on St Fechins and Glen Emmets in Group 4 after their relegation last August. They are three times Intermediate Championship winners themselves.

Cooley Kickhams will take on Dundalk Young Irelands and Hunterstown Rovers in Group 1. Rovers’ were first out of the draw in Darver and will know they are up against it if they are to compete once again in the latter stages of the competition this summer.

In a twist of fate, Group 3 pairs Oliver Plunketts, Clan na Gael and Kilkerley Emmets together in a repeat of last year’s grouping for the three clubs. Kilkerley were last year’s beaten finalists. In Group 2, St Brides and St Kevin’s meet again as they did in 2019. They are joined by Junior champions Roche Emmets.

The most notable group in the Junior draw sees Glyde Rangers put alongside Dowdallshill and Lannlaire in Group 2. No team has won the Junior Championship more times than Glyde’s six. But having lost three finals on the spin, can the team from Tallanstown go one further in 2020?

John Mitchels and Westerns have been regular opponents in the Championship in recent years and they meet again in Group 3 alongside Na Piarsaigh of Dundalk and St Nicholas in what is a geographically balanced four team group.

Naomh Malachi and Wolfe Tones meet again for the second successive year in the group stages, this time alongside Stabannon Parnells and relegated Naomh Fionnbarra.

Sean McDermotts will fancy their chances of progression in Group 1 in the junior grade. They are joined by Annaghminnon Rovers GFC and Cuchulainn Gaels.

Peter Fitzpatrick, Louth County Board chairman and newly re-elected Independent TD, was on hand to help with the senior draw in Darver this evening. 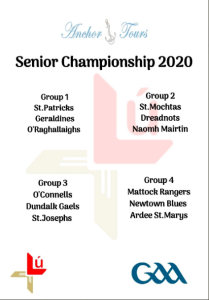 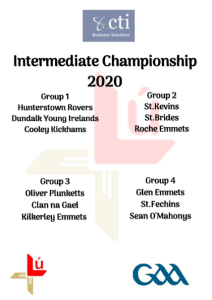 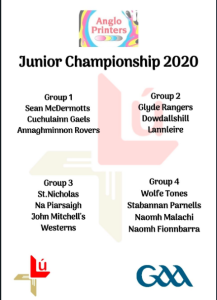 Love is in the Louth Air