The Louth GAA family was saddened when we heard the news of the passing of another of our 1957 greats, Alfie Monk.

County Chairman Peter Fitzpatrick extended his own sympathy and that of Louth GAA to Alfie’s family on the very sad news.

“I extend my sympathy and the sympathy of Louth GAA to his wife Gladys and his children Rodney, Jackie and Gary, daughters-in-law Amanda and Sheila, son-in-law Jeff, grandchildren Lewis, Zoe, Louise, Caroline and Hannah, his brother Eddie, brothers-in-law, sister-in-law, nephews, nieces, relatives and friends” 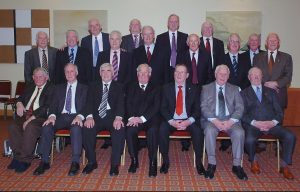 All GAA activity called off

Fixtures for the knockout stages of U14 Leagues.

Finals are now down for Sunday June 5th as Louth are playing in Cork on Saturday June 4th.

Congratulations to Conor Quigley who was named at no:6 after his excellent performance in the Lory Meagher Cup Final win on Saturday 🔴⚪