Louth secured promotion to Division 3 at the first time of asking with a comprehensive eight point Allianz league semi final victory over Carlow on their home ground in Netwatch Cullen Park.  In truth, Louth were in control throughout and never looked in trouble of missing out on that coveted promotion once impressive full forward Conor Grimes finished to net at the end of the first half. 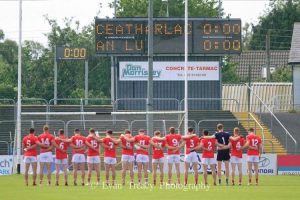 With a big lead established, Louth’s confidence surged and the directness of Mickey Harte’s sides forward play was eye catching, dazzlingly efficient at times. The sheer rate of scoring on the day highlighted that. 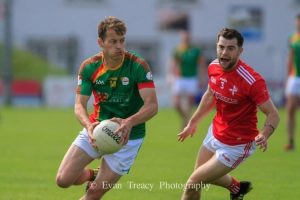 The opening score was as patient a score as you would see in the crunch clash under the baking Saturday sun. Carlow moved laterally through the phases with corner man Colm Hulton timing his run on the loop to perfection to fire over in the hosts first attack.

Recalled Hulton was excellent in this period landing three scores in the opening quarter. 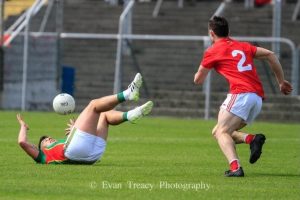 Louth corner back Dan Corcoran of Geraldines pouncing on a loose ball.

Louth on the other hand took the patient route into the contest overall, sizing up their opponents before some incisive inter play opened Carlow up on numerous occasions. Grimes, Sam Mulroy both finding the range, along with terrific Ciaran Downey popping up with his first. 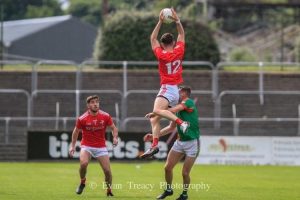 Ciaran Downey of Newtown Blues soars to field a ball.

Choosing to build from the back, Harte’s side looked supremely organised at times, and it showed.   Despite spurning two goal chances from Ardee pair Liam Jackson and Ciarán Keenan, the visitors opened up a 0-05 to 0-03 lead before the first water break. 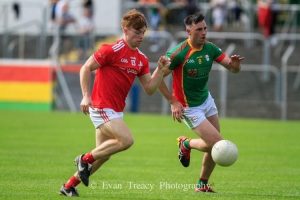 On the edge of the square, Grimes was instrumental to Harte’s attacking game plan all afternoon, his link play with talisman Mulroy was outstanding but his goal aiding to his playmaking was the difference in the game, especially during the pivotal second quarter. 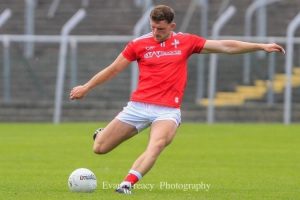 Grimes was able to play the pure target man at times, setting up marauding midfielder Ciaran Byrne for all three of his first half points. Just before those assists, Byrne would set Grimes up for his goal in the 31st minute. Showing poacher like instincts to palm in at the back post.

Paul Broderick then chipped in with three scores for a struggling Carlow, the experienced forward keeping Niall Carew’s side in the game just before the break as they trailed 1-12 to 0-07 at the turn. Carlow with it all to do. 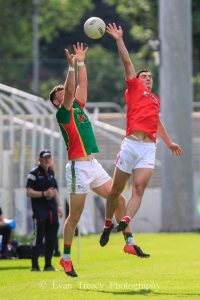 Emmet Carolan of Newtown Blues contesting a ball with Mickey Harte looking on in the background.

The revival initially looked to be on when Broderick landed two quick scores upon the resumption.  Then Ciaran Keenan was again denied for a goal and Josh Moore countered to land the score the other end. That provided the 100 vocal Carlow supporters present with something to shout about but that was a good as it got for the Barrowsiders.   The second half water break broke Carlow’s momentum and Mulroy killed the game off entirely with five points in the final quarter. Four whopping long range free’s.   Chris Blake did come off the bench with two points before Jamie Clarke raised the green flag for Carlow with a penalty but the ruthless nature of the win will no doubt delight Harte. His new Louth pupils are showing an keen eagerness to learn.