By Dan Bannon at Aughrim.

Louth made it back-to-back promotions with a seven-point victory over relegated Wicklow at a sun-kissed Aughrim.

Mickey Harte’s side will play Allianz League Division 2 football for the first time since 2018 as they eased over the line with a late Tom Jackson goal.

Louth looked to Ciaran Downey in the early stages, having moved to a more advanced position as their successful campaign progressed. The Newtown Blues man at full forward, had three points inside the first five minutes of the game.

Wicklow proved to be awkward hosts and the experienced Mark Kenny was proving to be a handful for Mickey Harte’s side. With his third point of the half, Kenny gave Wicklow the lead for the first time in the contest after 18 minutes to make it 0-05 to 0-04.

The game then became an arm wrestle, both sides happy to get players behind the ball and sit tight on their tallies. Louth responded through Sam Mulroy but they eventually prized Wicklow open to give them the advantage they deserved.

Form player Ciaran Downey was the man that made the breakthrough. With a clever run and an even cleverer pass from Liam Jackson, Downey spun Tom Moran and finished low to the net to give Louth a healthy 1-06 to 0-07 lead going in at the break.

Eoin Darcy notched two late points for Alan Costello and Gary Duffy’s side. With the flatness gone from their legs, Louth opened up and got their running game going and as a result the league’s top scorer Sam Mulroy turned the screw with three placed kicks to stretch the visitors’ lead to six. 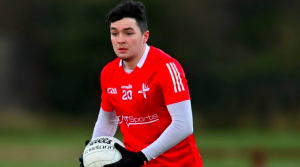 Wicklow full forward Kevin Quinn did make Louth sweat somewhat down the stretch with a goal after a quick free from Eoin Darcy but overall, Louth could lift it as they pleased.

That was apparent in substitutes Eoghan Callaghan and Ciaran Byrne finding the range as well as fellow replacement Jackson’s major in the finish.