Successful days like these, ones which vindicate the time and effort exchanged for little acclaim, are few and far between in the career trajectory of a Louth hurler.

Therefore, manager Paul McCormack was determined to see his charges soak in every last ounce of adulation in the aftermath of the county’s greatest small ball performance at Croke Park on Saturday afternoon.

On the vast, pristine terrain, the Reds simply devoured Longford, exacting some measure of revenge for group stage defeats by the same opposition in each of the past two seasons. But there is a greater context to the triumph. It was a display which hinted at this team not just turning a corner, but bulldozing a shortcut through the bend. No longer the neat and tidy triers with a soft interior.

A campaign’s worth of lessons – many of them harsh – and subsequent experience fused at the right time in the term. Seven days on from pulling through in a battle versus Leitrim, Louth were ruthlessly composed when faced by early adversity in the form of a 1-2 to no-score deficit.

On too many occasions they have wilted in such scenarios, but this time they responded to a setback with a lethal injection of conviction. Liam Molloy, the team’s outstanding midfielder, was the catalyst for so much of the quality play through sheer hard work in alliance with accurate distribution.

And then there was Seaghan Conneely, who pulled balls out of the heavens and struck for the crucial first goal on 12 minutes to condemn Longford’s superiority complex to the pits of the Hogan Stand. Louth were in a flow, their play through the lines too slick for the Midlanders to harness.

“I’m thrilled that they’ve given a huge performance on the biggest stage – and that’s a really good trait to have in a team,” McCormack said, delight dripping from his face.

“Anybody who has Louth connections will see the result and hopefully that will bring a bit of pride to them. And that’s what it’s all about, be it club or county, that pride in your place. I’m thrilled for the fellas.

“We knew if we got to Croke Park, on a really pristine playing surface, we’d do damage with our mobility and the way we play. We probably left a few behind us and we’re always looking for that next level.

“But to score over 30 points in a national final, I’m just tremendously proud of the boys and the way they carried out the instructions and stuck to the plan.” 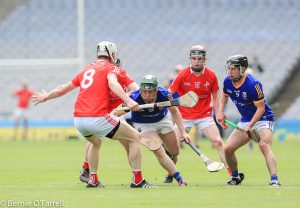 Following the early wobble, Louth asserted themselves authoritatively with Molloy and Seánie Crosbie dominant at midfield, providing a platform and supply for the forwards to cut loose. Paul Mathews, who McCormack was keen to stress was absent for the earlier championship clash of the sides, was evasive all through and dispatched a fabulous goal having assisted Conneely’s major.

The Wee men’s 2-9 to 1-7 half-time buffer certainly didn’t flatter given they struck a further seven wides but it wasn’t until 14 minutes into the second period – when Mathews spun his man and slotted past Conor Gallagher – that the Reds raced into a nine-point lead and concreted their victory. 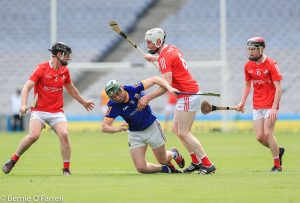 Not even late goals by either Reuben Murray or Enda Naughton could strip a glaze of gloss off the win. Louth’s third Lory Meagher success since 2016 should, they will hope, be the last time the county finds itself in hurling’s bottom tier considering the age profile of the players at management’s disposal – and with fresh talent still to come.

“I would hope the fellas are ambitious and would hope to push on – winners want more,” the Armagh native added.

“But that’s easily said, it’s up to the fellas’ actions on whether they want to do that, because there are tremendous opportunities out there for them.

“Nicky Rackard hurling is another level up in terms of physicality and depth, but we have a really young team – the average age starting was 24 – and there are other young fellas in the county who will, hopefully, want to come in and join the panel. 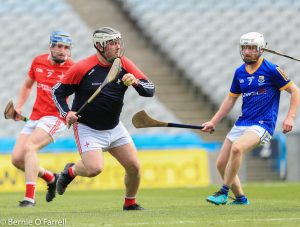 “We want to make that attractive for Louth hurlers so they can come in and add to it. Like we’ve got tremendous backing from the County Board – a S&C coach in full-time for the first time and that has really helped, but we need to start again now because hurling doesn’t stop. Hopefully the players will enjoy their club hurling and football and if that hunger and desire is there, they’ll put the Louth jersey on again in the winter time.”

Knockbridge HC & St Brides CC are hosting a Table Quiz and Presentation Night in the Clan na Gael Clubrooms in Dundalk on Friday, 3rd of Febuary.
See Details Below.

To register your place, please click on the link below
https://forms.office.com/e/69G3PuTMbW